I’m now on episode…. 7? I think? The last one was the one where they found *SPOILER*’s body and WOW was it emotional. Man, when *SPOILER* was in that *SPOILER* and *SPOILER* was holding them, I really thought *SPOILER* was going to talk *SPOILER* into not doing what they did, but DAMN they went there.

I’m suspicious of this girl that Runar likes, too. I feel something really messed up about her. Maybe she’s just a dick, but it seems like it might be deeper than that. Also, DAMN Dan(iel okay I’ll stop with 3 year old memes now sorry), was that really necessary? This show is getting ever more creepy and I’m not sure what the fuck is gonna happen next, but I bet it’s gonna be a plot twist from hell and I’ll be absolutely shocked and pretty damn terrified.

I wish I could give more details but this is such a big spoiler that, even though I’ve given pretty serious spoilers in the other post, I just can’t here. Just wow. Who would’ve thought that person would die?

Tonight’s episode involves discovering who is making the ‘reindeer juice’, who the dead girl is, and a little bit more about what’s happening with the Scary Parka Guy.

I’m really getting sick of the new governor dude. He’s one of those “NOTHING IS GOING ON HERE LA LA LA *fingers in the ears*” kind of dicks who knows bad things are happening and just wants to pretend it’s not so he doesn’t have to deal with it. They’re the worst kind of people. Also, I’m really sick of Sheriff Erik. Seriously, dude, you were cheating on your wife with his best friend for months last season and now you freak out and attack someone she PLATONICLY shared a hotel room with while trying to figure out what all kind of shit is going on? Erik is the worst kind of asshole.

Psycho Dan is def onto the Evil Dr. Lady who I’m pretty sure is def a serial killer back on the mainland. However, he’s being scary as hell right about now and it’s really freaking me out. Also, Petra is becoming a hardcore alcoholic and it’s kinda frightening. Just go be gay with Ingrid! (I hope I didn’t mix their names up, lol)

Also, there’s this really beautiful guy hanging around the Dying Lady and I’m not sure if she’s a lover or a secret son maybe? They have similar (freaking beautiful) eyes, but that could always be coincidence. Very interested to see where Pretty Shaman Guy goes in the story.

It’s late but I think I’ll watch one more episode tonight. Not sure if I’ll write the review, but I’ll see!

So, while I suspect these reviews will continue to be really short, since there are more questions than answers with each episode, I have come to the conclusion that while season 1 was freaky, it was more of a mystery.

This is straight up horror.

I’m scared shitless after finishing episode 3. I shouldn’t have watched this so late at night. I’m lucky my cat is sitting in my lap or I would probably be pissing myself.

In tonight’s episode, Governor Lady and Dennis Quaid go to a Russian village because of a strange call from the mayor of the town. While they’re gone, Not-Sheriff Erik and Maybe Gay For Each Other Cops Ingrid and Petra arrest and question the taxidermist, who had the dead guy’s head in his fridge. Ingrid also has to arrest her brother because his belt was found at the home of the dead guy. All the while, Dan is awake and wandering around town in a hospital gown which nobody seems to find as worrisome as a normal person would, and Dr. Creepy Lady is def experimenting on Elena in the research lab.

It gets really scary when Vince and Lady Whose Name I Forget find a fucking reindeer eating a polar bear, what the hell, and then at night, when another body is found while the ‘killer’ is locked up, the SCARY GOGGLES DUDE SHOWS UP AGAIN!

I’m terrified and it’s nearly midnight but I have to watch one more. I have to! May not write the next review tonight, but another episode is necessary!

Episode 2 of Fortitude is fucking mental. That’s all there is to it. I’m not sure what the hell is going on but I’m kinda terrified. In this episode, the Governor has been de-governored, the Sheriff was drinking antifreeze, the headless guy was into some hardcore drugs, and there’s a motherfucking bear in the school.

I’m really interesting about this scary doctor lady at the research lab. I’m pretty sure she’s evil and I’m excited to see what comes out of that.

I would write more, since this is like 100 words only, but I still don’t really know what the hell is going on in this season. Hopefully, we’re gonna find out who that scary show suit and goggles guy is. I’m so scared of that dude. It’s not even slightly cool. Straight up terrified. Next episode will probably make me pee myself, so tune in for that! 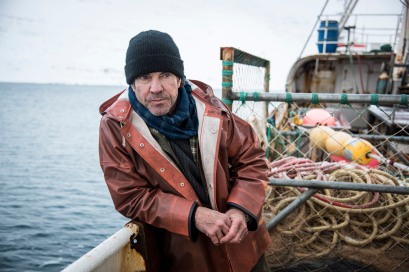 In the last post, I talked about how I had rewatched Fortitude season 1 finally in hopes of getting through season 2. Tonight, after a delay caused by Hurricane Irma skull-fucking the electricity in my area, I got my start by watching episode 1 of season 2.

The episode opens with like historic cannibalism? Not sure what the time period is, but it’s implied it’s a long time ago I think. It’s hard to pay that much attention when a dude is eating a baby. Anyways, that set the tone for what I guess is a season of cannibalism. Gone are the Zombie Murder Wasps and enter Weird Cannibalism Demons or something? I think it’s related to the “blood aurora” but we’ll find out I guess. The town has obviously fallen on hard times, so why not have Blood Aurora Cannibals?

The one thing that stands out in this show is how there’s more important black people in this TV show set in the arctic than in shows set in places where the demographics aren’t 99.5% white. I really dig this. Also, I like that the two (current) police officers are both women. I really like that they kinda seem to have a gay thing for each other.

Please make the two lady cops a gay thing, Fortitude. I have my fingers crossed!

That is all for now. Stay tuned for my reactions to the next episode of Fortitude whenever I get around to it! 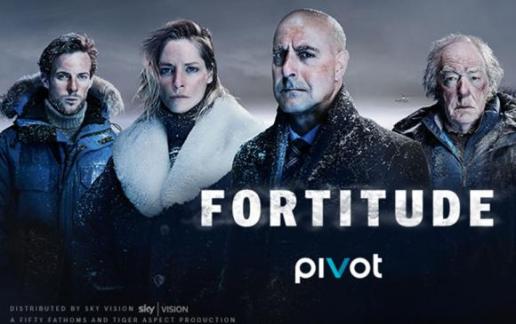 I recently (and by ‘recently’ I mean within the past 2 days) rewatched all of season 1 of Fortitude so that I can watch the rest (?) on Amazon and I have to give a little mini-review of season 1 for the uninitiated before I start working on season 2!

Season 1 of Fortitude is a very strange beast. Shown on a channel that no longer exists and based around basically ‘global warming will kill us all’ as a general idea, Fortitude tells the story of a mining colony (territory?) in the Arctic that I assume exists on Svalbard? Never quite sure. But anyways, that’s unimportant, it’s an ice town of 700ish people in the Arctic Ocean and, one horrible day, a horrible thing takes place: the town’s first ever murder.

I won’t try to explain the plot of Fortitude season 1, because it’s crazy, but I will say it involves global warming melting the glacier and exposing stuff that has caused some weird environmental issues with the animals in the area, such as reindeer having miscarriages en masse and polar bears turning cannibal, and the man researching this phenomenon gets hacked apart in his house by an unknown assailant.

It ends up being WAAAAAYYYY weirder and more ‘oh fuck’ than just reindeer miscarriages and polar bear cannibalism.

Fortitude is a show that’s pretty boring right up until it’s really not. There’s a fair amount of this show that, for a few episodes, is just a bunch of people living in a frozen hellscape and acting out because of it. There are 700 people in this town and yet somehow everybody’s able to fuck around on their spouses and nobody ever gets caught or found out through the gossip mill. There might not be any crime, but there’s a hell of a lot of banging folks you shouldn’t be banging, that’s for sure. For a while, that’s about all the excitement there is. Even when Mr. Dude gets murdered, you don’t really get anywhere in the investigation for quite a while. Because of that, it’s pretty difficult to stick with it until it gets good, but once it gets good, it gets good!

The characters are all pretty easy to follow, which is different for me, because often shows with a wide variety of characters we go between means I can’t remember who is who. However, with Fortitude I never have that problem. It does a great job making the characters very individual and all important enough for you to remember them. Some shows don’t even do that with their main characters. It’s a good show if you like suspense, science fiction, and great character work. The acting is all pretty great, too.

And if you’re like me and loooove the cold, bleak, snowy setting for dramas, you’re gonna be sooo happy with how intensely atmospheric this one is.

I’m going to begin my season 2 reviews hopefully on a per-episode basis, so you have that to look forward to! I’m trying my best to put more content on this site since I’ve really neglected it, so stay tuned and let’s see what happens!